Children of the Road

Mzaza's show Children of the Road is based around the theme of migrations, inspired by Pauline Maudy's Jewish family's journey from Spain to Morocco, France and Australia over the last few centuries, by percussionist Jordan Stamos's family history in the Turkish and Greek population exchange, and by the plight of displaced populations around the world today. The show will be toured with an optional visual presentation with projections to support the themes and stories that unfold throughout the performance.

Children of the Road presents a mix of originals and reworked traditional pieces. Much of the original material is in French and strongly inspired by Balkan music. Driven by her French and Spanish Sephardic roots, front woman Pauline Maudy sings in French, Spanish, Ladino and Turkish. She is a sublime and enchanting stage leader who delivers powerful and inspired performances. The musicianship of this outrageously tight group is equally impressive. Accordion, violin, percussion, double bass and Flamenco guitar - Mzaza has an army of talented composers and musicians. Through timeless melodies Mzaza embraces diversity, the old and the new, the familiar and the foreign.

Mzaza presents a show like no other made up of powerful, sultry multilingual vocals backed by acoustic instruments from faraway places - the kind of show that will make your heart beat and your feet dance. Mzaza has worked with community music groups and choirs across Australia to teach European and Balkan songs and to introduce unusual rhythms and scales in a series of incredibly fun workshops, which culminate in the participants performing a song with the band. At certain points in the show all audience members are invited to sing and clap along with some unusual rhythms, and dance.

Mzaza's media pack includes a media release, full colour bio with photos and video links to live performances, a copy of the latest album (which was awarded 'Best Song' [World Category] in the 2015 Q Music Awards), and if required a USB memory stick with copies of the above. Mzaza has been successful in arranging interviews and live-to-air performances on local/national radio, newspapers and online.

Over the years, Mzaza has worked with community music groups and choirs across Australia and at major festivals. The workshops can take place on the day of the show, or a day or two prior to the show and can be targeted at primary or high school aged musicians, adults or seniors. The workshops which are targeted specifically to the level of the group introduce unusual rhythms, tunes, ornaments and scales. Participants of the workshops are also invited to do Balkan circle dancing at the front of the stage. The goal of the workshops in the short term is to invite participants to perform a song or two with the band during the show. The long term goal is to enrich the existing community group music practices within the locality. Mzaza loves to work with communities of broad ethnic backgrounds and facilitate the sharing of their cultural knowledge with the broader community. Through regular and informative posts on their Facebook page, and through their mailing list, Mzaza keep in touch with the participants after their workshops/concerts.

"If the utterly remarkable level of musicianship on display doesn’t pique your interest, then take a look at astonishing front woman Pauline Maudy, she's entirely captivating and her vocals soar!"

“These are serious musicians; their blend of elements ... generate intricacies to which each of them must rigorously commit. There are no pretensions, no studied pseudo-mystical facades. Mzaza is comprised of skilled instrumentalists and generous performers, who relish a direct and celebratory connection with their audience. Pauline Maudy is a mighty talent, capable of raising the roof in four languages.

"Mzaza are one of the day’s most intriguing acts. The locals perform with traditional percussion and wind instruments as well as acoustic guitar and accordion, as singer Pauline Maudy sings multi-lingual ballads that transport the listener to Parisian alleyways one minute, then Eastern European gypsy campfires and dramatic Spanish landscapes the next.” 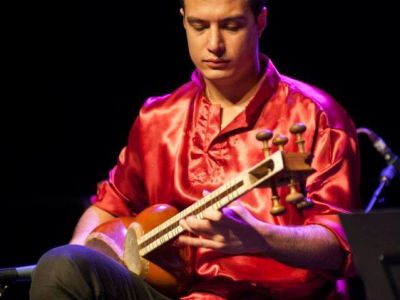 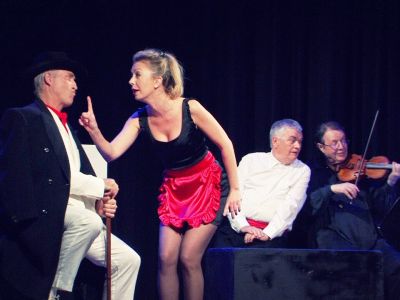 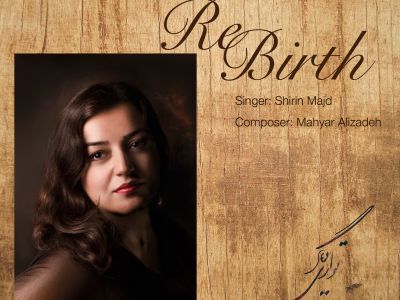