This is Motherhood, laid bare.

The artist formerly known as Liz Skitch, now known to all as ‘mother of two’, has teamed up with trail- blazing theater maker Maude Davey, to create a ground-breaking one-woman show exploring the changes and surprises that one encounters on entering Motherhood. MOTHERMORPHOSIS premiered at La Mama in 2018, played to sold out houses and received critical acclaim.

Sporting an oversized fish head, nursing giant pumpkins and flower arranging whilst lecturing on Doctor Spock, Skitch revels in the art of juxtaposition. With each hilariously absurd vignette, MOTHERMORPHOSIS explores the physical and emotional changes that mothers encounter and how we cope … or how we don’t cope.

MOTHERMORPHOSIS is designed to celebrate motherhood in all its beauty and ugliness. Through the voices of the mothers who have contributed to the production, it shares a wide variety of lived experiences from natural births to life saving c-sections, from healthy babies to sick ones and from the joy of life to the heartache of loss.

And yes there IS a live chicken in the show, fresh vegemite sandwiches, participatory hypno-birthing, full nudity and piping hot pumpkin soup.

This is Motherhood, laid bare.

Contains adult content, including full nudity. Live chicken to be sourced at each venue.

The company has a reputation for creating high quality performances that engage with audiences and communities. Some debase productions include the critically acclaimed Chasing the Lollyman, Sktich Tease, Spoilt, Hurry Up and Wait, The Clown from Snowy River, and Fly-In Fly-Out.

We produce a wide range of work for a wide range of audiences; from children’s theatre, to comic-drama, to cabaret and vaudeville. For debase, the relationship with our audience is paramount – this is reflected in the way we create and program work with and for specific audiences.

Debase uses a highly physical and collaborative approach to developing new work. We believe successful performance begins with a sense of play and that comedy empowers audiences to reflect and critique vital issues. We are committed to telling Australian stories.

For venues that are interested in a residency combined with the show, Skitch can connect with local creative mums through recording interviews about motherhood/ capturing the community's voice then run a 'share your story' theatre making workshop (incorporating recordings). As part of the residency Skitch can also provide an intimate preview reading of Mothermorphosis followed by Q & A or a show and tell of works developed in the workshop followed by tea and treats. Skitch conducted a weekend residency testing this model at Stratford Courthouse Theatre in the lead up to the premier of Mothermorphosis. It was well attended, led to a deeper engagement with the show and has gone on to inspire other creative mums to share their stories. NB- some of the voices of the mothers from Stratford have been incorporated into the soundscape for Mothermorphosis.

★★★★ "... a wickedly clever blend of knowing satire, surreal physical humour, clowning and burlesque ... Skitch has ... the skill to pull off a range of styles from narrative comedy to slapstick. Her seamless celebration of the pleasures and pains of motherhood rides high on left-field, impish humour, delivered with a sharpness and presence that will leave you helpless with laughter." (Read More)

★★★★★ "How often do you see a show which makes you want to give a standing ovation every 5 minutes because of the absolute genius on display? Very rarely indeed! There are so many ways Skitch engages and engages with the audience in ... respectful and uplifting ways. This show is a real hoot and real to boot. Don't miss it!" (Read More)

★★★★ "I know what you are thinking, “ANOTHER comedy piece on the struggles of Motherhood’, but this is very different ... not only ... funny and ridiculous but at the same time ... achingly human. There really is so much to love about this production. I encourage all to go see this ... tour de force before it sells out – because it deserves to." (Read More) 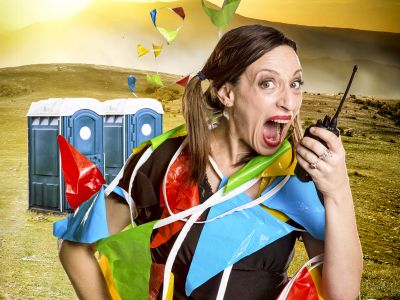 Banging on the Door 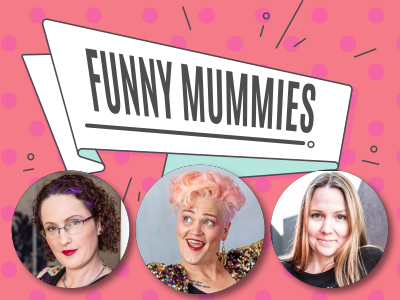