Don't mess with the Dummies

Stampede into the jungle for a circus extravaganza that will leave you chuckling like a monkey and roaring for more.

Lions and tigers and dummies, oh my! Set up camp and stampede into the jungle for an outlandish, circus filled extravaganza that will leave you chuckling like a monkey and roaring for more.

From the unstoppable Dummies Corp comes an all-new extraordinary adventure! Don’t mess with the Dummies,

They’re on an expedition and you’re invited along for the ride. Pack your bag, tie your shoes and get ready for circus-filled hilarity as the Dummies monkey around the jungle, swing through treetops and skip past foliage. With a rockin’ soundtrack, unbelievable acrobatics and trademark Dummies frivolity, let’s get ready to rumble!

Dummies Corp have been delighting audiences young and old with a nuanced blend of circus, comedy and imaginative play, creating shared and treasured experiences for families across Australia and around the world. Now, they've welcomed a brand new cast of fierce women into the team and are so excited to share this brand new production with young audiences and their grown-ups.

Don’t Mess With the Dummies is highly interactive. The performers climb through the audience and also may invite audience members to on the stage.

DMWD spray Silly String on the audience and stage. It is easily cleaned with a broom, vacuum and sponge

Dummies Corp. always meet and greet with the audience after the show offering pictures and selling merchandise

With rave reviews and sell out shows, This award winning, sidesplitting slapstick comedy routine takes the household wheelie bin to new heights, and delivers a dump truck full of hilarity!

Jamie Bretman, Jack Coleman and Simon Wright are highly skilled circus performers that can trash talk with the best of them, showcasing a stunning array of the highest jaw dropping acrobatics, juggling and stunt work, these dexterous dummies take the audience on a journey into their playful imagination, where they invite them to take a fresh look at the humble household wheelie bin.

For audiences of all ages be prepared for a great time.

It is this balance of physical comedy, circus and audience interaction that give this shows a unique wonder and charm. Like a Pixar film or an episode from Sesame Street, the show appeals on several levels with cultural references that resonate across generations. At the forefront of the show is the timeless and universal sense of friendship, fun and imaginative play.

This show is a fully-fledged all-women superstar ensemble, that encompasses an endearing meld of circus, comedy and character of which the Dummies are famous.

The way in which we engage with the community is we run a variety of interactive circus workshops, our approach emphasises accessibility, teamwork and positive interaction.

Company can offer two different types of workshops to local community whilst on tour, a clowning/slapstick focused workshop and a circus skills workshop.
Each workshop can cater for up to 30 participants ages 6+ and lasts for an hour. Participants don't need any prior ability and will leave having learnt some of the moves they have seen in the show, creating a strong connection between the performance, the artists and their own experience.

Both workshops, like the show, place great emphasis on creative play and empower participants to carry this imaginative embodied experience into their lives beyond the workshop. Workshops encourage individuality in creation, embodiment of skills and interpretation meaning that even once the company have left, participants can continue creation and play which encourages self sustaining creative communities.

“Endearing blend of circus, comedy and loveable antics” “There’s nothing as funny as a bum in the face”

“Endearing shenanigans in full flight” “Each passing minute continues to engage and surprise the audience” “They're cheeky, they're amazing and they'll jump into your affections” “huge doses of slapstick, inventive puppetry, imaginative gameplay” 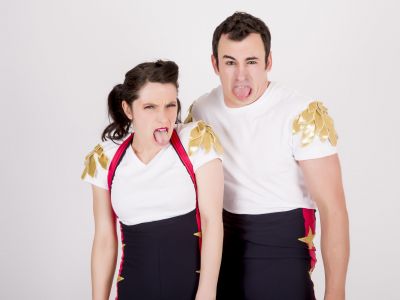 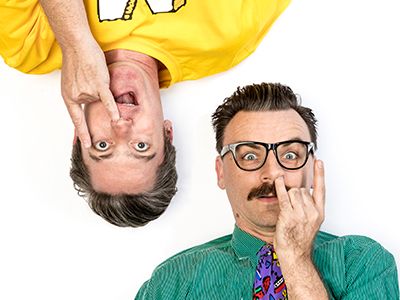