& I'll Cry If I Want To Photo by Brig Bee

Madhouse Circus are partying past their bedtime in & I'll Cry If I Want To!

Madhouse’s third work has only recently come to fruition and is ready for a touring life of it’s own. Sporting the acrobatic innovations that Australians’ are famous for, ‘& I’ll Cry If I Want To’ brings together three highly skilled acrobats to combine their knowledge and circus prowess into a jam packed family friendly performance. Keeping with Madhouse’s reputation for experimentation and quality circus, ‘& I’ll Cry If I Want To’ was recently described as “a performance that is highly representative of Australian circus at its peak - complete with an Aussie soundtrack to back it up!” – Tema, Weekend Notes 2019 (5 Stars). & I’ll Cry If I Want To is a fully developed circus work, featuring three childish acrobats, partying like it’s past their bedtime! Showcasing circus skills, such as hula hooping, giant German wheel-ing and some phenomenal trio acrobatics, our acrobats are not afraid to get ugly, take risks and support one another. Witness the taunts and tantrums when things don’t go to plan and the joy and happiness that can come from celebration.

The stage flooring MUST be hard surface, preferably wood. It is preferable that the stage has 10m length in a direction (diagonal is acceptable) however we have an alternate, smaller space version available for any sized venue.

An audience enters as strangers and leaves as a community. We’re offering a show that varying ages can all enjoy. Your aunty, grandpa, friend, neighbour or pet dog will walk away from this show feeling worthy of a celebration. Heart warming and full of daring acrobatics this show provides colour, sparkle and laughs to the entire audience.

Professionally shot images by Brig Bee Photography. Workshops can be offered in conjunction. Adelaide Fringe Season footage shot professionally and available to be cut into a sizzle reel.

Workshops: Circus 101 – for energetic children, parents and their children or beginner adults. Please note we are particularly interested in working with ‘at risk’ families or mothers and their children who would otherwise not be able to afford this opportunity. Three trainers take the students through three of the funnest circus specialties such as juggling, hula hooping, tumbling and group acro. Absolute beginners can go on to be confident jugglers or capable tumblers in just an hour, creating a noticeable improvement in the confidence and physical health of participants. We are particularly interested in ongoing engagements to create longer lasting impact. If we were travelling to an area that had already received a workshops from another group, we would love to be informed of what they already did so as to build on that knowledge for them.

Q&A: A very easy addition to our performance is a question and answer segment or discussion afterwards. We are generally very open people and each have stories to tell of our upbringing in youth circus, regional or city Australia, our positions as women in circus and how we have pursued our arts careers against many uncertainties.

"By injecting their exceptional circus style skills in between the chaos and tantrum fits, we are given a performance that is highly representative of Australian circus at its peak - complete with an Aussie soundtrack to back it up!" 5 STARS (Read More)

"The artists riff so inventively on games like pass the parcel and musical chairs, you hardly notice when they breezily up the ante with more challenging fare in hoops, German wheel and acrobatics." 4 STARS (Read More) 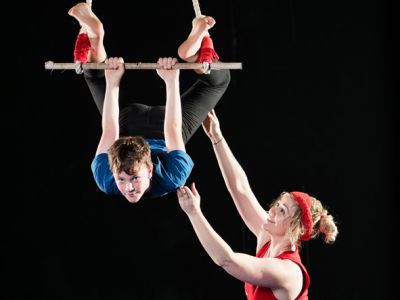 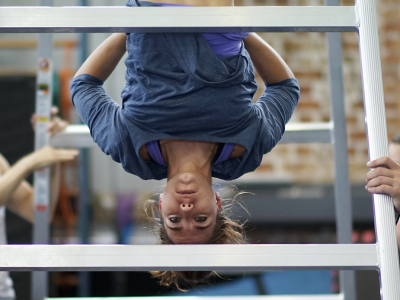