squeezing music from a balloon Photo by Leo Dale

The Cylisax Photo by Leo Dale

Youtube fan - "the single most awesome instrument I've witnessed, and I have the internet at my disposal.”

RECIPE: blend some vocal percussion with a bit of jawharp then add funky analog bass using ‘Mr Curly’. While that’s cooking make a clarinet from paper, play and loop some horn lines, add it to the mix and turn up the heat.

Linsey makes music by live-looping self invented instruments such as a paper clarinet, a drinking straw oboe, a Cylisax, a rubber glove bagpipe and “Mr Curly” (a contra-bass clarinet made from hose sounding like a 70’s synth). Using these instruments he creates layers of music which will have audiences either spellbound or dancing in their seats. He demystifies the process of musical instrument design and music itself, but at the same time creates music that is (in the words of his YouTube viewers): “mindblowingly fantastic”, “one of the most beautiful things I've ever heard”.

This is a music performance for all ages (from 11 to 91) and does not fit into any genre box. It is the culmination of 9 other solo shows that he has toured to 23 different countries. Firstly it’s great music (“Linsey Pollak is one of Australia's most brilliant and under-rated composer/musicians. - The Courier Mail, Brisbane”); it’s entertaining; and it smashes a few assumptions about music.

This is technically a performance that can easily be presented in almost any venue and suitable for audiences numbering 10 - 600 of any age.

Linsey Pollak is well known all around Australia as a musician, instrument maker, composer, musical director and community music facilitator. He has toured his solo shows extensively in Europe, Nth America and Asia since 1996.

He has performed at most major Festivals around Australia and recorded 36 albums (solo & with various groups). He has devised many large Festival pieces such as “BimBamBoo!! (Woodford and Brisbane Festivals) and “Sound Forest” (Qld Music Festival) and also collaborated on many Music / Theatre projects around Australia.

He has worked as a musical instrument maker for 40 years and has designed a number of new wind instruments as well as specialising in woodwind instruments from Eastern Europe (having studied Macedonian bagpipes in Macedonia).

Linsey has a reputation for making and playing instruments made from found objects such as rubber gloves, carrots, watering cans, chairs, brooms and bins. First developed in his solo show “Bang it with a Fork” and further in the acclaimed children’s show “Out of the Frying Pan”, this line of musical inventiveness has ultimately led him to spearhead Live Looping and develop his solo shows such as “Knocking on Kevin’s Door”, “Playpen”, “The Art of Food”, "Making Jam", “Cycology” and “Live and Loopy”.

"Linsey Pollak is one of Australia's most brilliant and under-rated composer/musicians. He is wildly innovative in the use of instruments but never lets his experimentation get in the way of the musicality of a work." - The Courier Mail, Brisbane

“He (Linsey) is famous Australia-wide and has the fantastic ability to capture people's imagination.”

"it was simply amazing and one of the highlights of the whole festival." - Rhythms Magazine

Associated with the performance there can be instrument making and live looping workshops. For example (but not limited to):

...."what the Foonk is a Foonki?" Well .... it's a reed instrument with a membrane reed. The membrane is made from a garbage bag and is attached to a garden irrigation T- junction fitting and the body of the instrument is a large slurpy drinking straw. AND .....it sounds Foonky! Join a group of up to 10 people and make your own under the tutelage of Linsey Pollak (the Foonki's inventor).

Experiment with creating music using loops.You can use voice or any sound making object. Use “live looping” as a tool to become more comfortable with improvising. You will use your voice, your chosen instrument and found objects to create music individually and in groups.......it's as simple as counting 1,2,3,4.....it's about organising sound in any way you want....and it's fun!

Linsey shows that music is something we can all do ....that we are all musicians.

"Linsey Pollak is one of Australia's most brilliant and under-rated composer/musicians. He is wildly innovative in the use of instruments." - The Courier Mail, Brisbane “Pollak’s creativity shines...combining comedy and music making.” - Hong Kong Standard "His show is warmly funny, entertaining, educational and inspirational." - Otago Daily Times, NZ "simply amazing, one of the highlights of the whole festival." - Rhythms Magazine 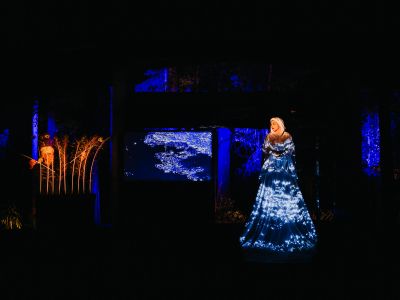