Only the Most Demure of Actresses Photo by Judy Ashton

Promise and Promiscuity: A New Musical by Jane Austen and Penny Ashton

Join Miss Elspeth as she battles literary snobbery, cousin Horatio’s digestions & her mother’s nerves, armed only with a blushing countenance, excellent ukulele skills & being quite bright, you know... for a girl.

Will Elspeth's secret life as the author of pirate novellas be revealed in her small country village? Will she marry dashing Reginald, snobbish Digby, her snorting cousin Horatio or just be an impoverished spinster forever? Will her Mama have a conniption on the spot and die of unmarried daughters? Will her silly sister Cordelia ever shut up? Will the Quigley Manor Ball feature a dashing member of the audience? Can 200 years of misogyny be poked fun at in a charming satirical way? Indubitably!

In this one woman show all of Jane Austen's character tropes are brought to life in a brand new story told with song, dance and appalling cross stitching. Packed full of direct Austen quotes, innuendo, pop culture references and one ukulele, this is a fond yet irreverent treatment of Jane by the long lost niece of her Irish Flirtation; Thomas Langlois Lefroy. Five songs by Beethoven, Strausses 1&2, Delibes and Anon all add to the frothy regency flavour of fun and biting social commentary.

Has mild innuendo content. Backing tracks are through QLab, so need a sound set up that can have playback and a headset microphone. Also a plug for the ukulele DI. It is better to have raked seating, but it is not imperative.

A solo comedian, actress, cabaret and musical theatre performer, Penny Ashton has been a performance professional for 17 years. She brings laughter with her all over the world having performed over 700 solo show from Stewart Island to Fort McMurray via Edinburgh and Adelaide. SHe has very popular, very portable shows that have great critical and commercial success.

Ms Jane Austen. It is impossible to underestimate the pulling power of Jane. There are hundreds of groups dedicated to her all over the world and millions of websites. This show is also a musical comedy that has many pop culture references for those who are not so well versed in the Janeite culture. It is also a feminist piece which attracts younger groups of women. It sold out two years in a row at the Edinburgh Festival with 3000 shows to compete with.

All Poster/flyer Files can be supplied. A huge variety of excellent reviews. Numerous awards. Good quality photos and a great video trailer. All manner of copy from blurbs, to fliers, to pieces for blogs and newsletters can be supplied. I am the 5th Great Niece of Jane Austen's flirtation Thomas Langlois Lefroy, whose nephew moved to Australia. This is an EXCELLENT publicity angle, especially in Australia. My mother hails from Queensland, so this Austen direct link is through the state.

I am New Zealander, but my mother is Australian and to see how my Australian heritage reaches all the way to Jane Austen is incredible. This is a strongly feminist piece, but is also served in a very silly fun way. It shows how far women have come but also how far we have to go in an entertaining, provocative manner. I also bring an Antipodean irreverence to the classics, which is to be encouraged.

Promise and Promiscuity is a delightful confection, with a suitably Austen-esque storyline of the triumph of humble love over class-conscious snobbery. A razor-sharp turn of phrase (more Wilde than Austen for its spectacular backhandedness) and an enthusiastic physical performance make this quite literally a laugh a minute. 4.5 Stars (Read More)

New Zealander Penny Ashton is a delight to behold in this one-woman pastiche of Jane Austen and modern culture, and you'll be delighted whether or not you know your Bennets from your Dashwoods. All in all, Promise and Promiscuity is a textbook example of how to do a great one woman show. 5 Stars (Read More)

In seventy minutes the multi-talented Kiwi delivers a hilarious take on Austen’s ‘Pride and Prejudice’, full of modern-day twists. I lost count of the number of characters she performs, with each so skilfully and humorously defined. It is full of razor-sharp wit alongside song, dance, and a little bit of ukulele. 5 Stars (Read More) 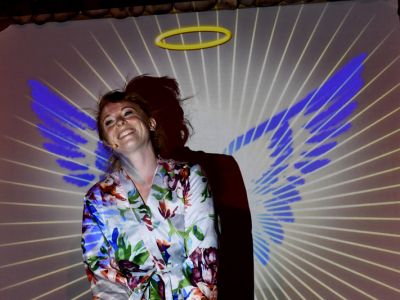 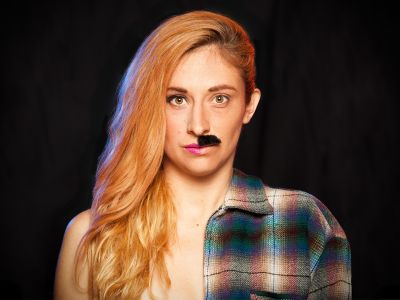 A Rose among Horns