The Bunny Club is a Black Australian Moulin Rouge meets Cabaret meets Chicago in Brisbane in the late 1960's.

The Bunny Club is an original piece of Black music-driven theatre. Set completely in an underground nightclub, with cabaret table seating and live band, the story is told though flashback, physical theatre and song-and-dance numbers.

Taking inspiration from a single photograph of a real-life Aboriginal bunny, the work re-imagines Brisbane in the late 1960's, through a black woman's lens. The show explores race, sexuality, gender and power in the context of First Nations Australians. Using an historical framework to examine these issues allows the playwright and the creative team (guided by a First Nations consultancy team), and us as an audience to reflect with a measure of distance whilst also comparing resonances with current vital issues where we are at as a society. Racism in Australia did not die with the Referendum and the sexual revolution and second-wave of feminism did not result in gender equality.

The Bunny Club brings these issues to the forefront and is a Black Australian Moulin Rouge meets Cabaret meets Chicago.

This performance will contain adult content and themes. There will need to be a pit for the band and the venue space is preferable to be able to adapt to a cabaret seating conversion.

BLACKBLEEP Founded in 2019, BlackBleep is a Queensland based performing arts company that creates and produces vital and timely new works in collaboration with local artists, communities and companies. Under the artistic vision of Yvette Walker, BlackBleep is a First Nations led company that puts urgent, bold, ambitious and relevant story-telling at the forefront.

With culturally appropriate and tailored methodologies of working with artists and communities with each project, BB aims to uplift the voices and stories of those that too often go unheard.

DEBASE Working in Brisbane and Melbourne, touring nationally and internationally, debase has been creating new shows since 1998.

Highly entertaining and riske, The Bunny Club is layered with song, dance, drama, action and comedy with a live band.

It is not only an historically rich and iconic character contextualised work, but it is a timely and urgent piece of theatre in it's intersectionality. Uniquely told through the lense of a First Nation's woman with a critically acclaimed award-winning creative team, it features key moments from Brisbane and Queensland's own history from the late 1960's, and breathes new life into some of those most well-known figures and memories, those still spoken about and some forgotten.

Presently in the creative development stage, The Bunny Club will have a comprehensive suite of marketing and promotional collateral created as it's development life continues. Rich in it's multi-artform elements and visual/audio presentation, in addition to baseline marketing assets, the work will have punchy and exciting 'extra's' including, music-score for downloading, film clip trailers, interview series and case studies from the work.

Community engagement opportunities could include (but not limited to):

Bespoke workshops, masterclasses with the cast and/or creative team with the community, dependent on the needs, requirements or request of each city/town. The potential engagement of the cast and/or creative team to work with the community to help them develop their own small showcase based on historical elements from their town/city. Digital exchange and legacy through an interactive web-series. Story-exchange, cultural and performance based relationship building with First Nations and non-First Nations communities.

These will be opportunities that will be informed by the scope of the programming interest and will be costed outside of the mounting costs of the show. 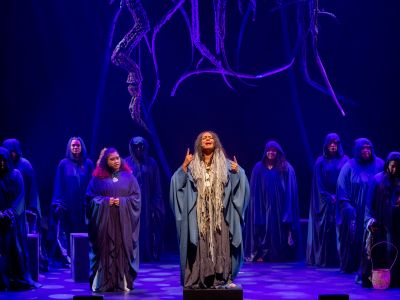