A bright eyed bug, an acrobatic anecdote and a marvel metamorphosis.

A little bit cheeky, a bit peckish and very circusy! The Circusy Caterpillar is a fun and interactive show sees our ravenous friend take to the stage to juggle plums, hula-hoop fruit and tell a few silly stories that will have your little one in fits of giggles. It’s the perfect show for your child’s first experience of live performance and is sure to induce a little nostalgia for the adults.

We follow The Circusy Caterpillar as she attempts and succeeds at several circus skills all the while dreaming of the day she’ll become a butterfly. The story is told with the aid of a narrator who spends as much time corralling the wayward caterpillar as he does furthering the plot. Each of the circus skills is set around the healthy meals that the caterpillar eats to stay strong and filled with energy.

The Circusy Caterpillar shows kids that from a small start, you can become something amazing and have a great deal of fun on the way.

The Circusy Caterpillar is a solo performance that requires little technical support. Felicia Lannan performs on the stage (or designated performance area) as well as in the audience and she brings with her all the props and set that is required. The largest act in the show is the German Wheel, a human sized hamster wheel, dressed up as an apple in this case, for the caterpillar to eat through. German Wheel acrobatics is rarely performed in Australia and is incredibly spectacular, especially when performed in an intimate setting. Felicia’s German Wheel routine requires a minimum performance space of 8.5m x 4m. The show takes 1hr to bump in and doesn't have any lighting or sound cues once it starts. The show CANNOT be performed on grass, gravel or sand.

The Circusy Caterpillar is specifically designed to engage very young children and their parents. In March 2018 it received 5 stars from Broadway Baby who said “The Circusy Caterpillar is a show aimed directly and oh so successfully at the little ones… Many circus shows aimed at very young children often feature performances that, to a jaded reviewer, aren’t actually that impressive but this is a showcase of several routines that could be transplanted into any high-quality evening show".

Video (including testimonies from previous audience members), Poster, Handbill, Media Release, Print and Digital Images and Schools Worksheet all included is sell off.

All of the circus props in The Circusy Caterpillar were made and decorated to look like various foods by visual artist Jessica Kelly. The show's star, Felicia Lannan, can run a juggling ball making workshop for up to 15 children either before or after the show. In the workshop children are given the opportunity to imagine and make their own circus props, as well as learn some fun and achievable juggling tricks and games. Unlike many physical activities for children such as team sports, circus is a non-competitive activity where participants are celebrated for their differences and strengths. Celebrating children for their individual talents helps build confidence from a very young age.

There is audience interaction for the kids, plenty of satire and self-deprecation to amuse the adults, and even an interpretative dance break! (Read More)

A showcase of several routines that could be transplanted into any high-quality evening show. (Read More)

I liked the part where she went upside down! 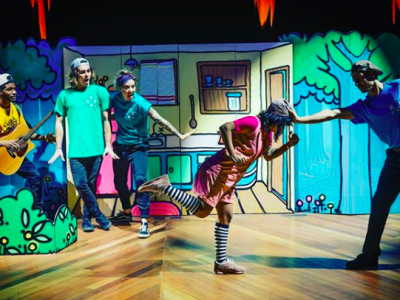 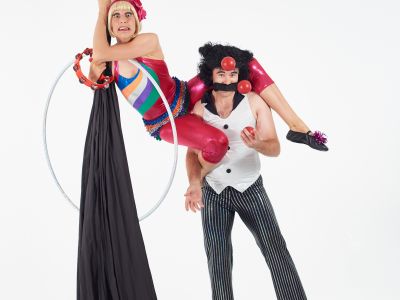